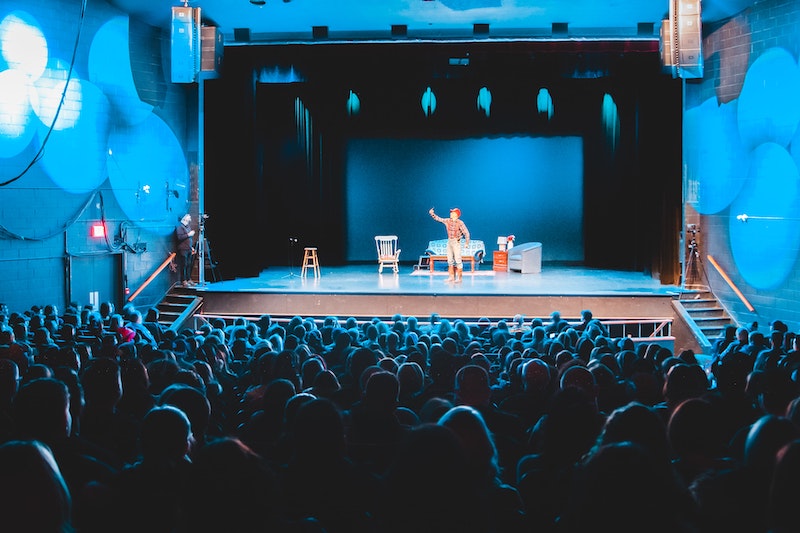 When we recount a story verbally, we usually say something like: “I went camping with Bob in Acadia, and we hiked for three days. Then, out of nowhere, a monsoon came in and we had to be helicoptered out.” That’s fine if you’re catching up with a friend over coffee. On the page, though, readers don’t have the benefit of your tone or body language to glean context. Too much exposition—telling the reader what happened—can bore readers to the point where they stop reading. When you tell, the reader has no choice but to interpret your words intellectually. Writing to reach the intellect falls flat. Memoir and fiction must engage the reader’s heart, not just her mind. Or, as I often tell clients: “Bring the reader into your body, so they can see through your eyes and feel what you felt.”

Characterization, action and dialogue are three building blocks that can help you create engaging scenes. Scenes help you to move the story along with less exposition—more showing, less telling.

If you’re writing third-person nonfiction (or fiction), you may have more leeway in diving deep into each character’s background, personality and motivation. Fiction writers, like actors, have been doing “character interviews” for years. Narrative nonfiction writers who focus on a topic, rather than memoir (Quiet: The Power of Introverts in a World That Can’t Stop Talking, NeuroTribes: The History of Autism and the Future of Neurodiversity), can—and should, when possible—interview the people involved, or do enough research to present them as full-fledged characters.

In memoir and other first-person narrative nonfiction, you’re limited to what you knew about each person at the time of each scene and how they expressed themselves. That means you’re relying on your perceptions of another person to convey their character. As we will see later, you can also use other people to reveal aspects of your character you weren’t aware of at the time.

Whenever you mention another person, give them a bit of characterization. Many first-time authors only offer descriptions of a character’s physical appearance. Characterization builds on description by showing how that person uniquely uses that particular physical trait (think: Her dark eyes flashed; he flexed his muscles without seeming to realize it; she peered over her reading glasses). Description gives us a still photo of a person; characterization shows us a snippet of a movie.

In his memoir The Color of Water, James McBride starts with description and segues into characterization: “At fifty-one [my mother] was still slender and pretty, with curly black hair, dark eyes, a large nose, sparkling smile, and a bowlegged walk you could see a mile off. We used to call that “Mommy’s madwalk,” and if she was doing it in your direction, all hell was gonna break loose.”

Or this, from Bev Sellars’ They Called Me Number One: “As a young girl, Gram traveled the Fraser River by canoe, even though she was deathly afraid of water.”

The depth of characterization will vary depending on how important the individual is to your story. For someone who appears only once—a bank manager, for example—you might have one line that conveys haughtiness, but you don’t necessarily have to flesh out their entire backstory. Characters are more memorable when you give readers a better sense of them as individuals.

Consider how the character lives in their body, and how they interact with their environment and other characters to reveal new information.

The word “action” brings to mind Captain Marvel, or maybe The Fast and the Furious, but it’s pretty simple. Action is whatever happens during the events of a scene. Actions don’t have to be dramatic. Although “action” primarily refers to what characters do during a scene, it can also refer to the environment in which the scene takes place. Rather than telling us the construction noise drowned out any hope of conversation, could you show us the character covering her ears, or maybe show us the twitch under her eye, or her foot tapping on the patio?

Action also keeps the reader engaged and can be used to convey a character’s personality, or the tone of a situation. Does someone play with the stem of a wine glass, or do they pick it up and chug it? If someone strode across the room with clenched fists, as their boots pounded the floor, that would make us feel very differently than if someone glided across the floor like a dancer, their arms open in welcome.

In his recently released memoir The Shoe Boy, Duncan McCue writes of his first experience goose hunting with members of a different First Nations band in northern Quebec:

“The men began calling to [the geese]. When it became clear the flock was attracted to our pond, the hunters went quiet, shushing me. We all crouched, still, no one moving. I held my breath, my head tucked into the spruce boughs on the ground. I kept one eye looking up, hoping to catch a glimpse of the geese, now circling above us. All I could see were clouds, silently floating past in the grey-blue sky. But I heard the geese. The wind whistled through their flight feathers as they glided over top of the blinds, ready to touch down on water. Then the jolting BLAM! of one shotgun.”

McCue brings us inside his experience, and when the gun goes off, we’re as jolted by the noise as he is.

Another great use of action is to convey era—if a latchkey kid is playing with her pet rock while watching Batman reruns, we’re in the 1970s. If an adult slides a phone into his back pocket, though, that brings us squarely into the 21st century.

And, of course, action is what moves the plot forward. Finding an eviction notice. Catching the eye of a stranger in a crowd. Receiving a mysterious gift.

Dialogue is one of the most engaging ways of showing. Dialogue can 1) reveal a wide range of information, 2) reveal another character’s secrets, and/or 3) reveal things about your main character (you in memoir) that you weren’t necessarily aware of at the time.

Exposition—“this happened, and then this happened…”—can quickly become boring. Instead, see whether you can communicate traits or backstory through dialogue.

Instead of recounting conversations in exposition, put it in dialogue. If you’re writing memoir, don’t obsess over whether you remember the precise words; more important is that the substance of the conversation is true. If your mother said you couldn’t have a puppy, don’t write that she said you could have one. There are purists who say memoir should only contain 100% verifiable dialogue, but the way I see it, memoir gets at the emotional truths underlying the objective facts of a story. Besides which, memory can be spectacularly flawed. Tell the truth, don’t libel anyone and tread carefully.

As with action, dialogue can convey a distinct time period. “Dude, take a chill pill” conveys a different era than “Shireen’s finsta is lit!”

Memoir writers can double-check dialogue with the other people involved. Use your combined memories, along with your knowledge of the individual’s distinct voice, to re-create dialogue.

Dialogue alone can help bring a scene to life. However, if you only have dialogue—without characterization or action—it can become confusing for the reader. Include actions to help readers create a more high-definition picture of the scene in their minds.

Bringing it Together: Weaving Characterization, Dialogue and Action

Here’s one example of how Jeanette Walls brings together characterization, action and dialogue in her memoir The Glass Castle:

But just as the kid who was It [in hide-and-seek] was finishing counting, the door opened and someone else tried to get in. It was Billy Deel. He hadn’t even been playing with us.

“You can’t hide with me,” I hissed at him. “You’re supposed to find your own place.”

Billy crawled inside. The shed was tiny, with barely enough room for one person to fit in crouched over. I wasn’t about to say so, but being that close to Billy scared me. “It’s too crowded!” I whispered. “You gotta leave.”

Reading this scene immerses us in the experience. We feel cramped and invaded, just as Walls felt at the time.

Weaving these three elements together sounds harder than it is. Even the most verbose, exposition-prone manuscripts I’ve seen include at least one or two spontaneously shown moments, with excellent usage of characterization, dialogue and/or action. These are typically in scenes, or sections of a manuscript, that the author is most excited about writing. Once I’m able to point out where clients have used characterization well, for example, they are able to apply that to other moments and scenes.

If authors know how to show, why don’t all authors do that throughout? Aside from “they don’t know any better,” I’d say the answer is really about vulnerability. It’s easier to “tell”, because we’re keeping the reader at a distance, where we’re not vulnerable to their judgments (or our potential shame). To create an immersive scene is to pour your heart, soul and blood onto the page.

All three techniques can be used independently and together to create character depth, to further the story and to reveal more about other characters and, in memoir, the author’s relationship to them.