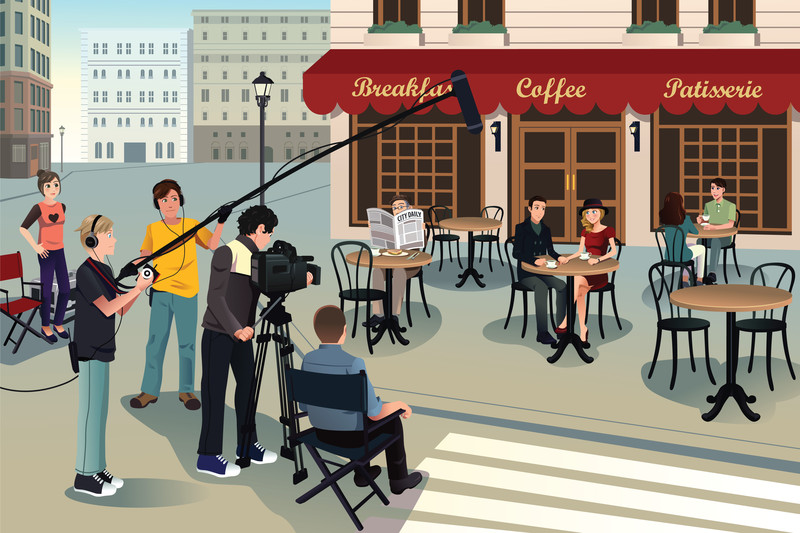 One of the benefits of having worked in so many mediums – print, television, stage, online, stand-alone interactive and film – is that I’ve learned a variety of storytelling techniques that are transferable among platforms.

There’s something in the combination of having been a stage manager, a TV writer/producer and a film critic that combines to make me a highly cinematic writer. I don’t mean screenwriter, or that I write epic, sweeping stories easily adapted to the screen (I don’t); I mean that I’ve learned the art of visual storytelling, and when I write, it’s as though there were a camera in my head. I tell the story as I see it in the screen of my mind. Here are a few of the things I do:

This is actually a TV technique, and it’s usually called a “cold open” (the part that comes before the opening credits) but in writing, I call it a grabber. The idea is to grab the reader’s attention using evocative language that transports them into the middle of the story. I frequently use this technique for reports, brochures and other lengthy pieces, as a way of engaging the reader and enticing them to read more.

For the rest of a piece, I tend to go macro to micro – think “zooming in.”

Always orient the reader first. Think about the opening of a film. You see the landscape, the context, the era, the population (or lack thereof). Purely by the details revealed during the opening credits, you know whether you’re in an urban setting, a post-zombie apocalypse or the jungle of the 16th century.

This is essential when you’re writing about a place that isn’t there yet – any kind of destination in the planning or development stages, whether it be an adventure park, a mixed-use development or a ski resort.

Nonfiction writers need to do this, too, even though your world is likely to be one that already exists. You don’t need to state the location outright or in the very first sentence, but it does need to be revealed in the first paragraph through details, dialogue or other technique.

Establishing shots are also important whenever the action shifts to a different, significant location. You don’t need to give the coordinates, but if you’re talking about a performance at the Opera House, and your reader has never been there, offer a description of the place, what it looks and feels like, maybe some of its history, if that contributes to the story – before you get into the action. (Advanced writers can reveal this information through the narrative; eventually, this technique becomes so intuitive that it’s fluid, and the location information becomes woven into the scene.)

In film, a quick look at the sky can tell us the time of day. This can also be indicated through a bridge shot – a sunrise, sunset, a quick shot of a clock, someone waking up… there are infinite ways to visually convey the passage of time. In writing, you need to be more concrete: “The next morning,” “two weeks later,” “the previous Tuesday.” Unless a scene directly follows the one before, the general rule is to give the reader a relative or concrete time anchor*.

Similarly, don’t jump from the doctor’s office to the Eiffel Tower without letting the reader know. These transitions can be simple, “On the drive home…” “Two months later, we were in Italy…” etc. These are location anchors, and they help keep the reader oriented. Jump cuts – cutting abruptly from one scene to another – don’t work so well in writing.

Any time you change scenes, make sure the reader knows how much time has elapsed and where they are now.

*There are exceptions. If you’re writing a story that is deliberately out of sequence, it’s possible to use other techniques to indicate which scenes are present, which are past and which are future. These range from dialogue cues to descriptions of politics, music or settings that vary from what you’ve established as the baseline. But that’s another post.

Where are you putting the reader’s attention? Start with a wide shot description – say, of an emergency room – to convey a sense of atmosphere, and then zoom in to the specific scene that you’re writing about. Even once you’ve zoomed in to your action, remember to incorporate occasional sights, sounds, smells that are happening off the page, to keep the reader immersed in the atmosphere. (Caveat: If you’re writing in anything other than omniscient POV, limit your description to what your narrator can see, hear, smell, touch, etc.)

Intermittently allow the narrative to pan (move across the room) to other people or areas. Let’s say you’re in the ER for a while (or you’re writing about somebody who is). What else is happening? Who else is there? This is a great way to create a sense of place, as well as to convey the passage of time, in a smooth, uninterrupted flow. Panning is “telling” – you don’t need to get into details (and besides, you probably don’t know the backstories unless you overhear them). The point of panning in film is to mimic the movement of an eye scanning the room.

This is an editing technique, not a camera one, but nonetheless… It means to jump back and forth between scenes occurring at the same time, in different locations. Each scene can move the story forward, and if done correctly, each scene can move the other forward at the same time. It’s often used to build tension and give the viewer a more comprehensive understanding of the story. It’s a way of offering the reader multiple perspectives without losing a cohesive narrative voice. (Perhaps obviously, this can only be used with omniscient POV.)

There are numerous other film techniques writers can use. A great exercise is to watch a film (especially a documentary), make note of the visual storytelling techniques and brainstorm how those can be translated to the written word.

These are things I do intuitively, because I happen to have a fairly visual mind for a writer. If you’re not a visual person, this may not work for you (maybe I’ll do another post using auditory cues). Also, don’t overthink it. My fear in writing all this material out is that it kind of sounds like it takes the magic out of writing – and to me, it doesn’t. I don’t approach this in a “thinking” way; it’s intuitive, and I’m trying to communicate these techniques in the hopes that other writers will benefit.

Do you use any filmic techniques in your writing? If so, which ones? Let us know in the comments.