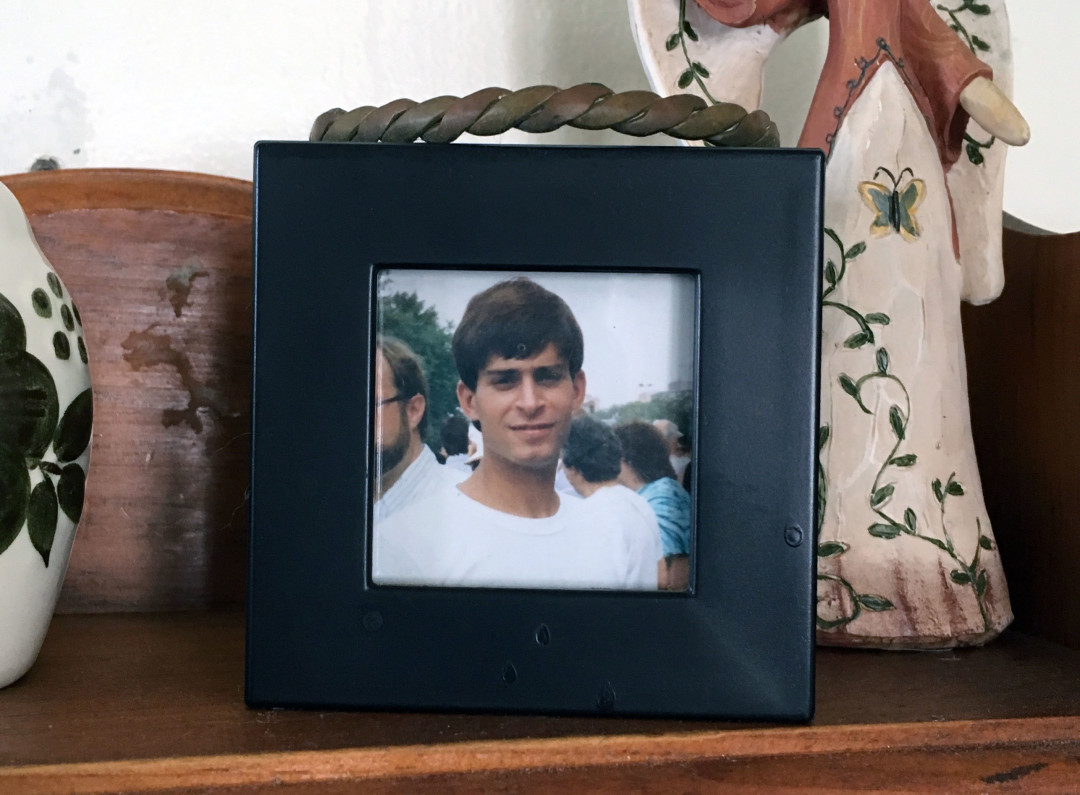 “Are you insane?” I heard my friend Tom, his voice rising at the end of the sentence, his ever-so-slightly sibilant “s” dragging out ‘insane’. I could see his eyebrows raised above those tortoiseshell coke-bottle glasses, that familiar look of incredulity. “I mean, it’s very sweet of you, but… are you insane?” 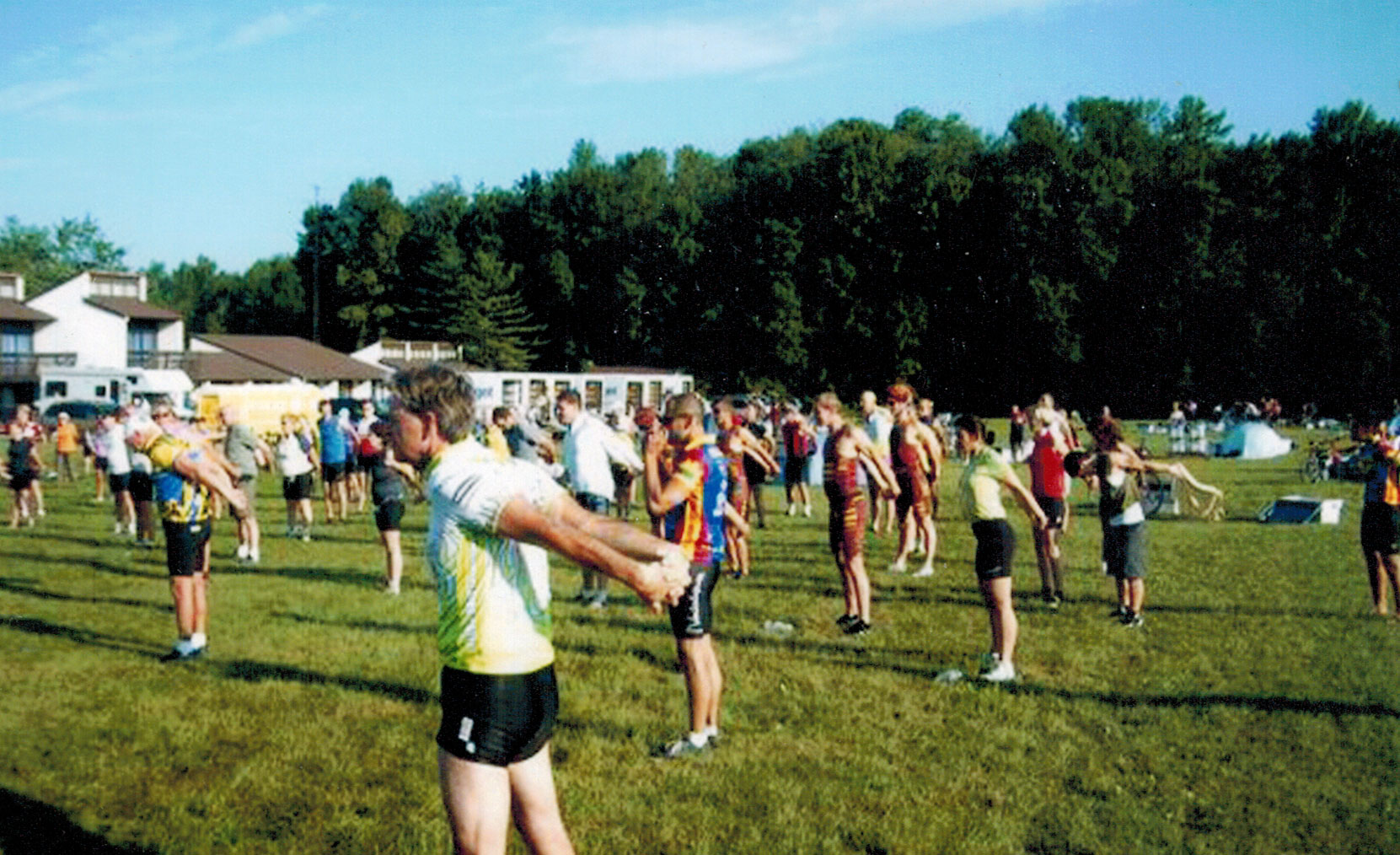 I was standing on a circular patch of grass outside the Finch subway station, the sole wearer of sweats and sneakers amongst a few dozen lithe bodies in Sugoi cycling shorts and Shimano toe-clip shoes. This was my first training ride for the 2003 Friends for Life Bike Rally, a six-day, 660-kilometre trek from Toronto to Montreal that would raise nearly half a million dollars for the Toronto People with AIDS Coalition.

A blond, tanned man gathered everyone round. “This is just a warmup,” he said. “35km. Shouldn’t take more than an hour.”

What the hell am I doing here?

Golden Boy was already out of sight, an acid-trip trail of brightly-coloured jerseys on expensive bikes behind him. By the time I picked up my Kona hybrid and made it out of the parking lot, I was exhausted.

I thought of all the reasons I couldn’t do the ride:

I pictured Tom rolling his eyes. “You’re crazy.” I took that as a dare. I had to do it:

Between 1989 and 1991, my three best friends died from AIDS. Before Tom, there was Ray, a swaggering, sexy man who survived a year longer than his doctors predicted. In between was Michael, Ray’s partner, a slight man who was justifiably pessimistic. They were 35, 32 and 29, respectively, and their deaths shattered my heart.

After Ray died, I inherited the braided copper bracelet he always wore, the one Michael bought him during Carnivale in Rio one year. Before the first training ride, I wrapped the bracelet tightly around the handlebars for visual and visceral motivation.

When I arrived back at the subway, nearly three hours after I’d left, I could barely walk. Maybe I should find another way to contribute.

The next week’s training ride was 43km. Well-meaning veterans gave me advice:

It never became easy. The first 20km were always hell. I began to accept that and force myself through it anyway. I tried not to care about being so slow that everyone else was finished before I hit the halfway mark.

I ripped out an Adidas ad from a running magazine. It read:

When I was in stages 4 and 5, I looked at the bracelet and thought of Ray, Tom and Michael. I remembered sitting with them one night at a local greasy spoon.

“Some day, there will be a million people with AIDS and the government will have to do something about it,” Tom said.

Michael, the Eeyore of the group, turned to me. “Some day, Sarah, you’ll think back on this night, and we’ll all be dead.” 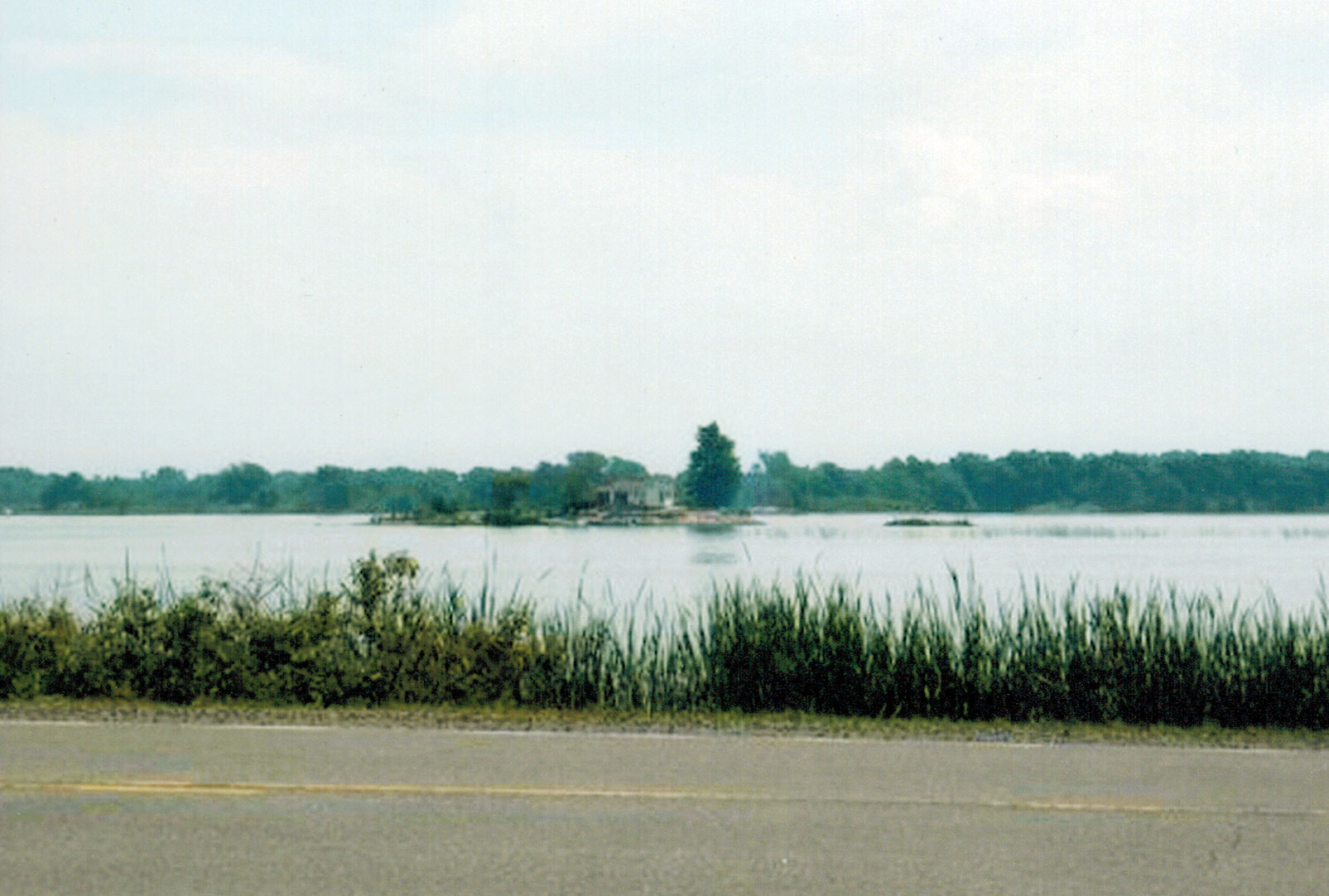 The distances increased every weekend – 50km, 75, 100. I wasn’t the slowest any more, but I still cherished my time alone. As I rode through the countryside, I talked to horses, cows, sheep and goats – and, of course, to the boys.

One Saturday, I took off by myself for what had become a familiar, easy ride to Oakville, 30km along the edge of the lake. I felt good, so I kept going to Burlington, another 35km – all downhill. By then it was well over 90 degrees; my swollen feet were bursting out of my shoes, and I realized I still faced roughly 60km of uphill riding. I focused on what I’d learned about hills: don’t look up, and just keep pedaling. One rotation at a time.

By the time I hit the Toronto city line, my feet were burning and blistered. I stopped at a corner store and bought two bags of ice. I hobbled over to the streetcar stop, hoisted my bike up, along with the bags of ice, and slumped into a double seat. I placed one bag of ice across each foot. Cold had never felt so good. The ice melted and trickled down the grooves of the streetcar floor. I began crying – uncontrollable sobs of exhaustion and defeat.

A month before we left for Montreal, I went for an early-evening spin in Sunnybrook Park. With trees on one side and the river on the other, I felt blissful, invincible.

Suddenly I was sliding down the stony river bank on my left hip, knees twisted and bike in the air – still attached to my feet. A racer had run me off the path, coming around a blind curve. My cycling shorts were shredded. My arm was gashed. I dusted myself off, a little dazed, and calculated: I was still 15km from home. Walking wasn’t an option. I got up and kept going.

Five minutes later, I veered to avoid a young boy on a tricycle, and again I went flying. Again I landed full-force on my left leg.

This time, it was harder to get back on the bike, but I didn’t have a choice. After washing out my wounds with water from my Camelbak, I cycled very, very slowly. Everything seemed surreal and a bit out of sync.

Every day, I decided not to go through with the ride, and every day, I looked at the bracelet and committed to it again. Even as I was packing my camping gear into the two small Rubbermaid bins I’d been assigned, gathering maps for the routes and signing medical releases, I quit – again and again. Once I realized that my stuff was going to Montreal, I figured I might as well give it a shot. 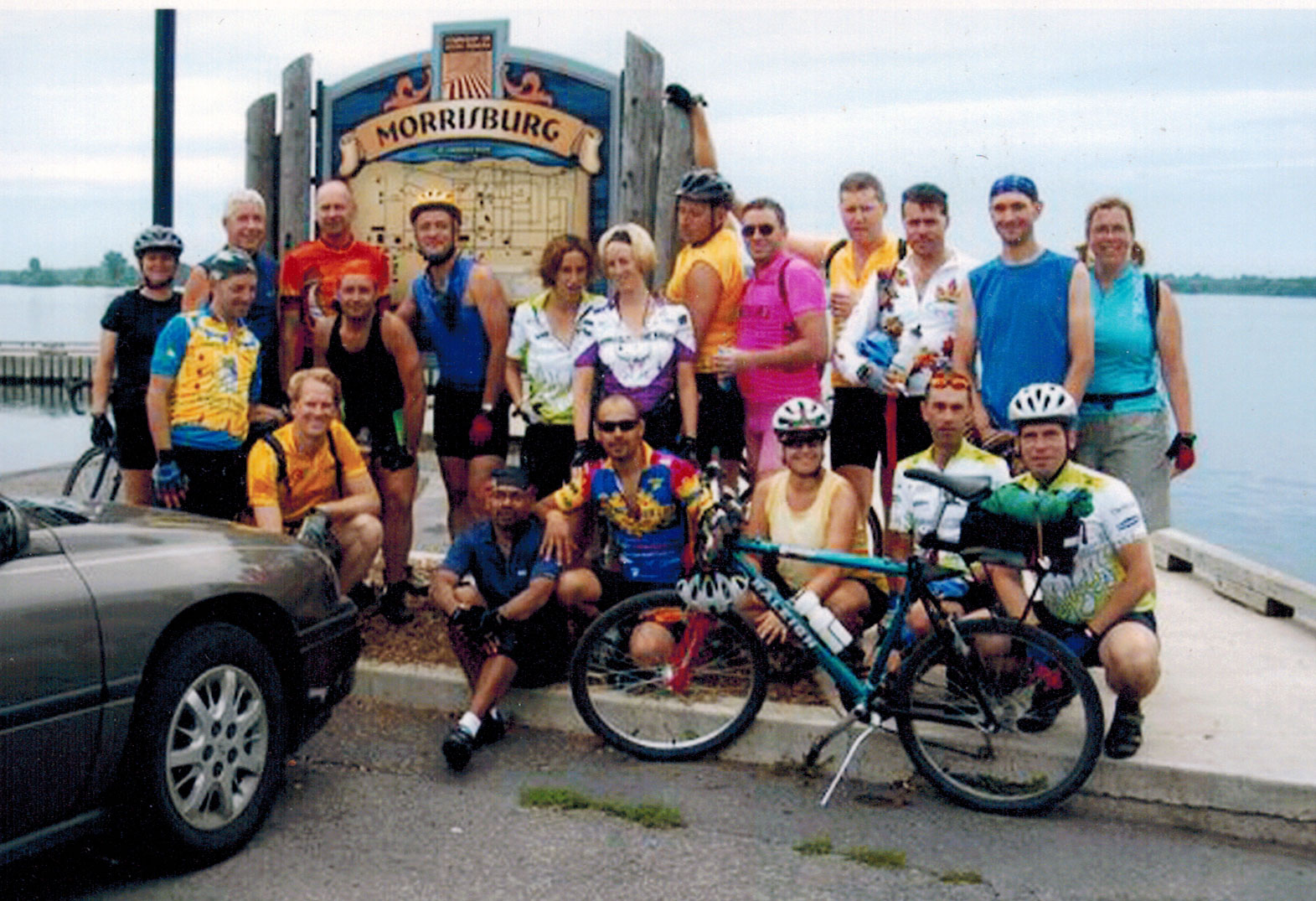 On the second day of the ride, an hour from the lunch point, a searing poker bore into the side of my knee. For the first time, I understood the phrase blinding pain: I couldn’t see. I stopped. I stretched. I gulped down Advil and Tylenol, but nothing helped, so I pedaled the next 20 kilometres using only my right leg. I had to ride in a van the rest of the way to the campground. I bawled – exhausted, anguished and feeling like a failure.

Through massage and ice, my knee held up until the fifth day, when I was soaring through the Thousand Islands, keeping up with the middle of the pack. It was heaven. Until the pain returned with a suddenness that made me shriek.

I pulled over and lifted my left leg onto a park bench. I began screaming at my knee like some kind of overzealous coach. “Come on! You can’t bail now! You have to start working! Get it together!”

Then I tried cajoling, “You’ve come so far, you’ve helped me so much. Just a few more kilometres, just one more day. You can do it. I know you can. Please?”

“Sarah,” I heard Tom say, “Do you realize you’re talking to your knee?”

At the next check-in point, the team doctor pulled me from the ride, explaining that I’d probably been injured back in Sunnybrook Park. Medically speaking, I shouldn’t have been on the ride at all. I was to stay off my bike for the next three to six months.

So I didn’t make it the full way. That was disappointing. But I made it 500km on a torn meniscus. I learned that I’m capable of far more than I ever imagined. I can do anything, as long as I approach my goals in small increments and don’t think about the hill ahead. There may be forces outside my control that shape the outcome, but as long as I don’t quit, I won’t fail.

As for how I managed the 500 klicks? The bracelet. And the boys. 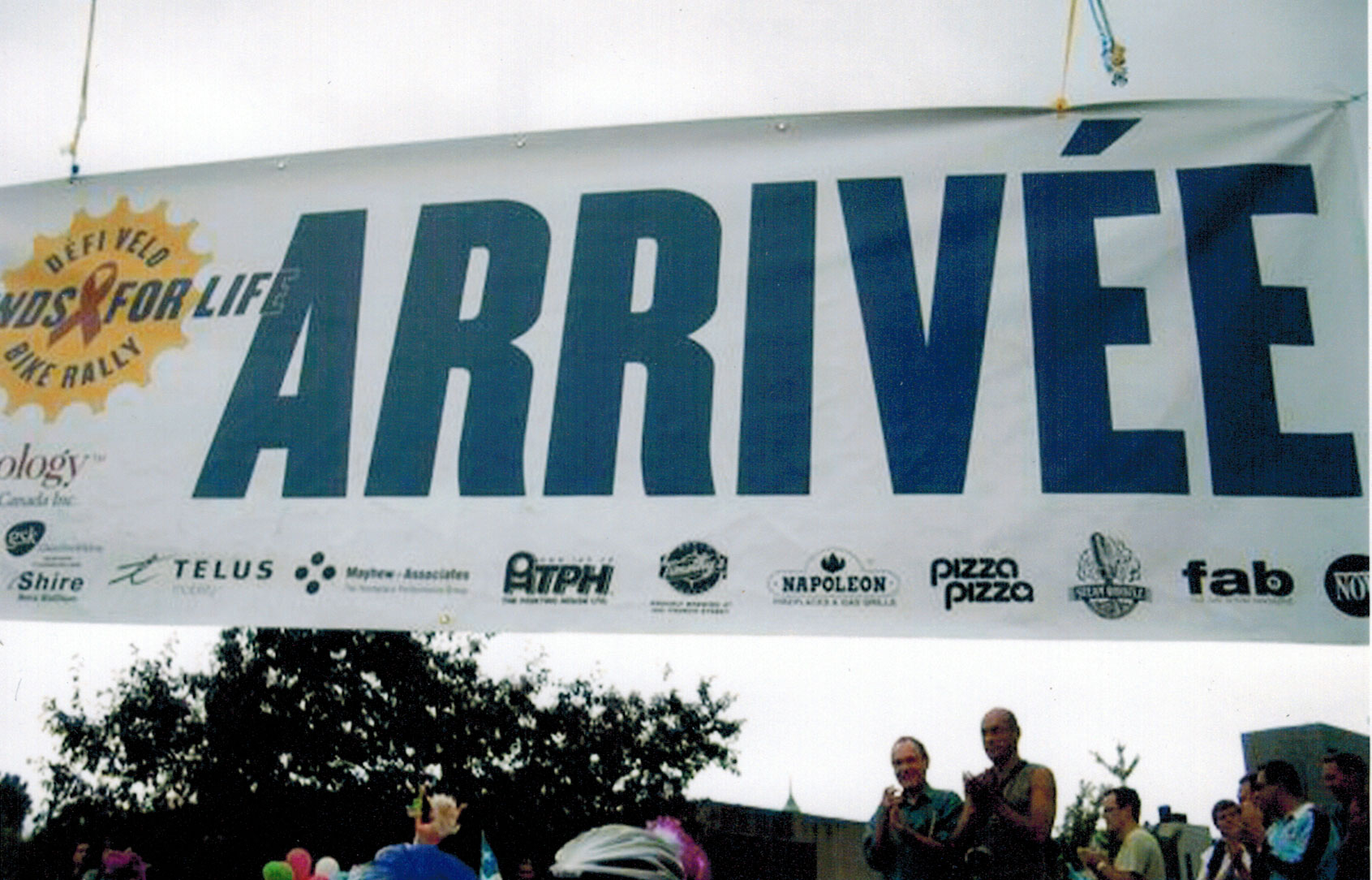 Published in Stories of Strength (2005), a post-Katrina fundraising compilation