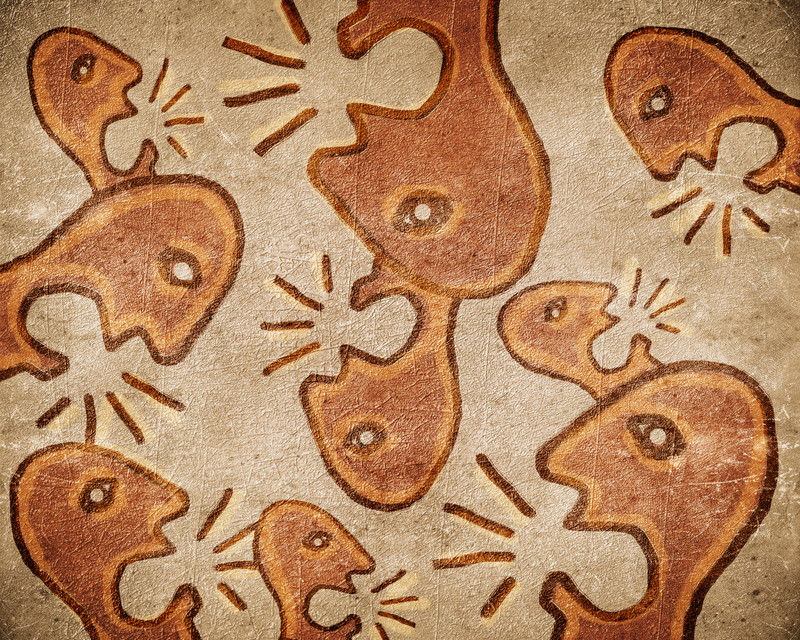 The Latin-based languages comprise 26 symbols that, arranged in a mind-boggling array of variation, somehow connect us with one another. It’s pretty awesome, when you think about it. Yet it has limitations.

Not only do most words have multiple meanings (like ‘conflict’ and ‘story’), but we tend to forget that words are only symbols. Words can’t capture the essence of anything; they are, at best, pointers. More often, they’re representations of thought patterns, and who needs more thoughts dancing around their mind? When you combine these factors, the potential for misinterpretation is substantial. So…why bother writing at all? Why aren’t we all constantly in silence? Maybe we should just communicate in koans? Well, at this point in our evolution, language is the best vehicle most of us have for communication.

The upside is that language, when used well, can create powerful experiences for the reader.

If I tell you that I went walking in a forest, that gives you information, but it doesn’t create an experience for you. The word “forest” doesn’t capture the fragrance of baked pine, or the feel of old leaves crunching underneath my feet, or the curious stare of a raccoon as it scampers up a tree. Yet as you read those sensory phrases (‘baked pine’), your brain pulls up your own experience of the sweet fragrance of pine under the summer sun. Maybe you remember it from playing Capture the Flag at summer camp when you were a child, or from setting up the tent on a hike you took with your partner last weekend. That phrase helps you personalize the experience by triggering mirror neurons in your brain. These are neurons in the frontal cortex that fire when not only when you take a particular type of action, but also when you see someone else taking that same action (and, alternately, when you see someone experiencing something—it’s why we wince when we see someone stub their toe).

But there’s more: According to neuroscience researcher Vittorio Gallese, our mirror neurons fire when we read about someone else taking an action. The author of the linked Psychology Today article, Norman H. Holland, Ph.D explains:

“Gallese calls this mindreading, and yes, we mindread, but, he says, something faster, deeper, more primitive also goes on, something pre-rational, something you can’t express in a verbal, cognitive way. When we read fiction or see a movie or a play and even when we see a painting, we map these fictional humans’ actions, emotions, and sensations onto our own brains’ visceral, motor, and sensory representations. That accounts for our emotional experience, which comes before our cognitive experience.”

Fiction is called out in the above paragraph because, with few exceptions, nonfiction has traditionally been more focused on communicating information, rather than evoking an experience in the reader (and also, the study appears to have been about whether the brain can relate to invented representations of humans). By mapping techniques from fiction, playwriting, screenwriting and more onto nonfiction—in other words, by using those principles, but strategically rendering real-life events rather than invented details—nonfiction, too, can create that emotional experience.

The more evocative your writing, the more resonance it creates in the reader. It helps the reader adopt your story as his own. In fact, mirror neurons are part of what neuroscientists now call the “resonance circuit” in the brain.

As writer Jeremy Adam Smith puts it in his Greater Good Science Center article on The Science of the Story:

“Experiencing a story alters our neurochemical processes, and stories are a powerful force in shaping human behavior. In this way, stories are not just instruments of connection and entertainment but also of control.”

For nonfiction, I might replace ‘control’ with ‘influence,’ but maybe that’s just me trying to sound…not-controlling.

A Word (!) On Nonduality

The English language is inherently dualistic; it divides, labels and separates. It says this, not that; then not now; here not there. It’s how our bodies and minds navigate this physical world, but writing about nonduality can be a particular challenge.

I’m here, and you’re there, and time is linear, but there’s only now—and now-now is different from then-now, and then follows now, yet there is only one now…add I AM into the mix (although it is the mix, AMIright?), and it becomes even more confusing. As someone said on Twitter recently…

Nonduality stuff has a way of transforming into word salad as it is written down.

The thing about word salad is, if you understand the speaker’s perspective and worldview, it’s no longer word salad; it makes complete sense.

The key is knowing your reader. If your reader already understands the limits of language, if they have an awareness of nonduality, you can use phrases and sentence structures that would melt the brains of most editors. These sentences might not make sense to those who see the world in a dualistic way, but that’s okay.

When you’re writing about nonduality for people who see the world through a dualistic lens, then it becomes more complicated. Personally, I still use (and prefer reading) first- and second- person pronouns, simply because that’s the language we’re working with, and it’s less clunky than saying “this body-mind” or some similar “spiritually correct” phrase (which, in turn, can be perceived as a type of jargon and can alienate readers to whom those phrases are unfamiliar. But that’s for another post.) Sometimes, working with duality is as easy as saying, “Yes, this isn’t completely accurate, but it’s language, so what can we do?”

Metaphor can help (you might have noticed there’s a lot of metaphor in spiritual literature). Metaphor is a way to transcend the logic of the mind (which is limited) and touch the collective unconscious. In regular fiction and nonfiction, metaphor is great for helping a person logically see a situation a different way; however, it can also be a way of evoking an implicit knowing.