Love Letter to an Island 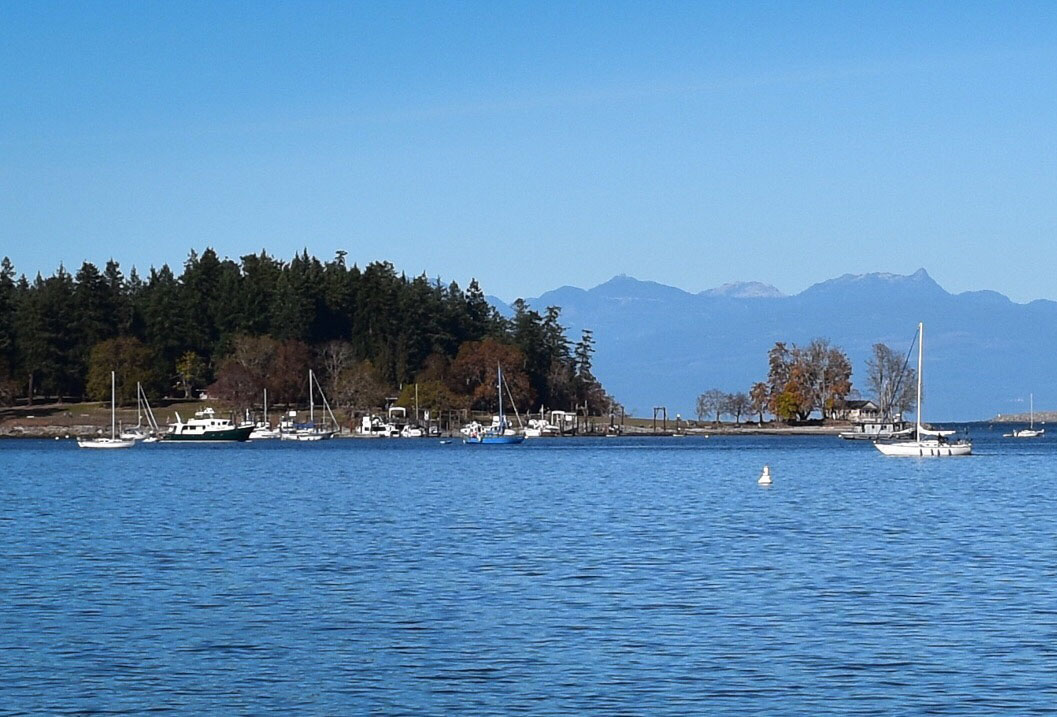 Love Letter to an Island was originally written for Latitudes Magazine in March 2016.

The Snuneymuxw consider Newcastle Island a sacred healing ground; some New Age types have suggested it might be a “vortex”—a place of powerful spiritual energy. Everyone who visits can feel it. This convergence of ancient wisdom, modern philosophy and popular opinion makes you wonder: What is it?

On the central east coast of Vancouver Island, the city of Nanaimo is working its way out of decades of being the butt of British Columbia jokes. Those of us who live here, however, love the laid-back quirkiness, near-universal acceptance of individual differences, and its ambling pace. We also treasure the breathtaking pockets of raw nature that remain between parcels of suburban sprawl.

Now that the downtown is thriving with small, locally owned boutiques and eateries, the once-industrial city has become something of a trailhead for Vancouver Island adventures—of which there are many.

Visitors arrive on the ferry then decamp to storm watch in Tofino, hike the Nootka Trail or watch the tides go out for miles at Rathtrevor Beach. For some reason, Newcastle Island Marine Provincial Park, one of two Gulf islands framing the entrance to Nanaimo harbour, flies under visitors’ radar. Which means locals get it mostly to ourselves.

Newcastle—Saysutshun to the Snuneymuxw First Nation, who discovered it (along with the rest of the area) millennia ago—is a 2.66 square kilometre ancient forest, uninhabited by humans save for a caretaker, and devoid of vehicles except for a couple of golf carts that staff use in their tireless quest to keep the 22 kilometres of trails clear and the forest healthy.

After decades of being used by various owners to mine sandstone and host Gatsby-esque parties, operation of the island has finally returned to the Snuneymuxw, and it’s now the hidden-in-plain-sight retreat for nature lovers, campers, bird watchers, dog walkers, mountain bikers, trail runners, Frisbee enthusiasts, campers, Boy Scouts and Girl Guides. And me.

At least a few times a week, spring through autumn, I head across the harbour on a foot ferry—to walk, to write, to generate ideas and to clear out the mental clutter that comes from overthinking.

Did I mention I overthink? I can ruminate the entire seven minutes of the crossing, lost in thoughts, oblivious to the gentle breeze and rhythmic harbour waves. Yet as soon as I step onto the Newcastle dock, an exhale of body and mind begins. Up the gravel path I walk, past the welcoming totem pole, past a grand hall and expanse of manicured lawn, into the stillness. Whether I’m concerned with the balance in my bank account, wistful for a friend who’s far away, or trying to figure out how to help a client tell their story—I know that Newcastle will quiet my mind, heal my heart and bubble up ideas.

The shrieks of Boy Scouts and the hum of lawnmowers fade into the distance as I inhale deeply—baked pine if it’s been dry, ripe earth if we’ve had rain.
The trees tower, impossibly tall and thin, a canopy for the sprawling plants, shrubs, bushes and smaller trees that blanket the forest floor. Step by step, a rhythm emerges. The simple, physical act of walking takes me out of my head and into the moment. Each placement of the heel, each flex of the thigh, each rolling moment of contact with the ground frees me from the tyranny of thought.

We live under a collective delusion that thinking more is the key to solving problems, even though sages from Thoreau to Einstein have told us that’s not the case. In my experience (and, increasingly,research is proving) the best way to solve problems is to stop thinking, to stop the mind from its incessant chewing of ideas in order to free original thought. And the most effective way I’ve found to stop the mind is to immerse myself in nature. This nature.

I walk down a short, steep and rocky hill, past a tangle of plants and bushes in countless shades of green. I deliberately avoid learning the names or purposes of trees, plants or flowers. I prefer a direct experience, free from my mind’s classifying, organizing, questioning.

With last year’s leaves crunching underfoot, I enter a stand of evergreen whose only branches are at least a hundred feet up, maybe two, creating a mystical bright spaciousness that’s rare in a forest. New life sprawls everywhere; it grows from trees that have fallen, out of stumps, and onto the tops of other trees. And then there’s the salal, oceans of it, carpeting the forest floor, filling every crevice that sunlight and rain might possibly reach. Emily Carr once wrote that it seemed

to be “exploding from the earth”. Here, it grows in waves, bright new leaves interspersed with the rich green of older branches. Some plants rise up to my shoulders; others barely to my knees. It seems low this year, because we haven’t had much rain, and this is, after all, a rainforest. Each year, tiny green berries emerge alongside minuscule heart-shaped white flowers, tinged with tiny red cilia. Over the summer, the berries mature into maroon, then into an edible midnight blue.

Buddhist teachers talk about the stillness deep in the ocean. It’s here, too, deep in the forest, and its resonant effect creates stillness in me. Sometimes. Of course, I can also get halfway around the island and realize I’m still arguing with someone in my head (but hey, at least I’m winning) or worrying about this thing or that. As Thoreau observed more than a century ago, it is a shock and a disappointment to find that one’s body has ventured deep into the woods while one’s mind remains preoccupied. But awakening to the distraction is a first step. Then I can focus on things around me: the whisper of wind in the branches, dots of sap like crystals in the sunlight, the fragrance of pine and cedar and juniper, the rough feel of moss against my palm. Breath.

Here’s what else I notice when I’m paying attention: Electric-blue dragonflies, and tiny black butterflies with the most brilliant fuchsia dots on their wings. Pine trees dotted with small translucent brown pods that burst open each spring to reveal the softest chartreuse. A symphony of textures and colours on the trunk of a single tree. Thousands upon thousands of miniature daisies dotting open spaces, some with tinges of pink on their white petals. And, each year, an increasing number of even tinier purple flowers interspersed between them. I wonder, briefly, if the pinkish daisies are a result of some cross-pollination…and then I notice I’m wondering.

In the forest, there’s room for all types. It doesn’t matter whether cedar, maple, Douglas Fir, pine, blue spruce, whether ferns or salal or that spiky circular grass with lateral blades that grows in marsh areas.
Oaks don’t judge arbutus for not producing acorns (at least, I don’t think they do). There are dozens, probably hundreds of types of moss that live here, too, and fungi of unimaginable beauty. It’s all part of the ecosystem and, as Eckhart Tolle points out, what the mind perceives as chaos is actually a perfect order. Manifestations of life sprawl everywhere, and after death, plants and trees provide nutrients and platforms for other plants and trees. This seeming messiness that hides perfection, this lack of judgment, is a metaphor I seek to apply to my own life.

On the southeast corner of the island is Kanaka Bay. In summer, when the sun is overhead and everything is lit full-force, the water in shallow pools along the shoreline are alight, almost Caribbean aquamarine, while farther out, towards the Coast Mountains, the Georgia Strait is a hypnotic royal blue. In summer, the landscape—or seascape, as it were—is invariably dotted with some combination of ferries, intrepid kayakers, sailboats and motorboats, and with increasing frequency, freighters that have been turned away from the Port of Vancouver. Those really muck up the view. But the trees don’t seem to mind.

One day, I heard a lone saxophone—beautiful and haunting—which is an odd thing to hear in the middle of an uninhabited island forest. I assumed that the workers on the freighter were listening to music, though it seemed awfully loud (water does carry sound, but still…). If I could hear the notes so clearly on land, I couldn’t imagine how loud it would be on board. Maybe it was to keep whales away?

Later I discovered the music came from a local man who brings his saxophone to the island and serenades the trees and wildlife. I love that I live in a place where I’m not the only one who sees nature as sentient, and where people—not just me—are expressive about their love of and for nature.

About halfway along the Shoreline Trail, which traverses the southern coast of the island—past Kanaka Bay but before the camping sites and Gooseneck Passage—stands a circle of seven evergreen trees, hundreds of feet tall. In the middle, a simple flat bench that has been my sanctuary for years.

When I went off a lifetime of antidepressants six years ago, I sat on this bench and meditated, and the trees taught me to calm my mind over and over again. When, a few years later, work fell away, and I didn’t have enough income to cover my rent, the trees taught me to stay rooted just in this moment. I focused on the sensation of bark—rough, smooth, wavy—beneath my palm, the variety of moss growing on the trunk, or the woodsy fragrance of pine and cedar. And by focusing on those sensations, my mind quieted. These trees have seen me through hard times and joy; they have shown me what it’s like to stay rooted when things change. I have become a literal tree-hugger, and even—when nobody is looking—a tree-kisser.

In Melbourne, Australia recently, city officials assigned email addresses to specific trees, so residents could notify the city in case there were issues to be addressed (fallen branches and such). Instead, the city received an influx of love letters to individual trees.

I get that. This essay is, in my own way, a love letter to this island and those seven trees. I could also wax poetic, almost romantic, about the sinewy muscle of the windswept arbutus trees that hover over the path, or the comfort I feel when this circle of trees comes into view, about my awe at their strength and resilience and unconditional presence. I could write volumes about hundreds of individual trees on the island.

When I’m feeling happy, coming to Newcastle amplifies my joy. I’ve come here in (many, many) moments of heartbreak and despair, though, and they’ve been here just the same, welcoming me each time.Ultimately, I come here to focus on the essence of who I am…and the secret is that ‘who I am’ and the trees are one and the same.

I look at the forest and I see friends, acquaintances, God. Leaves rustling in the wind are friendly greetings from another dimension. I stand at the base of hundred-foot tall trees and look up, way up, reminded that my concept of “time” is an artificial construct. These trees were here long before I was born, and they will be here long after I’m gone. But I want them to know that I have witnessed them, and I want them to witness me.