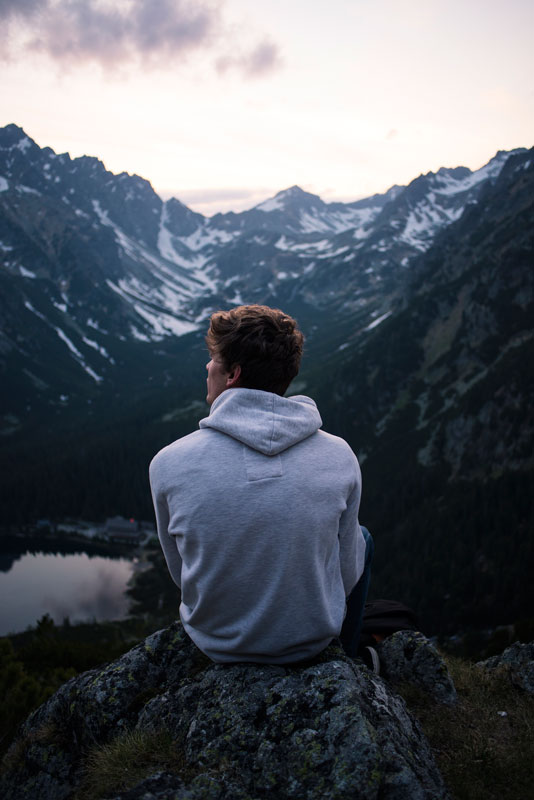 POV stands for “point of view,” also known as perspective. POV keeps the reader oriented. It’s a framework that helps the reader interpret what’s being revealed and by whom. For that reason, an inconsistent POV can break a reader’s trust—which is the ultimate sin of writing, unless you’re an experimental novelist playing with that concept.

POV is the perspective of the narrator—the lens through which the story is told. It matters because it helps to create internal coherence. What is shared is only what the POV allows. In fiction, the narrator is a character, and differentiating narrative voice from authorial voice is a whole practice unto itself.

Here are the most common fiction POVs:

(Third-person) Omniscient: “A woman watched the train roll by. A child, mistaking her for his aunt, waved, but she didn’t see him.”

First person: “I saw the train roll by; later, someone told me he saw a child wave to me out a window” (the narrator didn’t see the child wave out the window and therefore, can’t state it as fact)

Third-person Limited: “She saw the train roll by. Later, someone told her that he saw a child wave to her out a window.” (The perspective of the character, which is limited to what the character experiences)

Second person (avoid unless you’re Chuck Palahinuk and/or are writing guided meditations): “You’re watching a train roll by. You can’t see the child, but he thinks you’re his aunt and waves to you.”

As a nonfiction writer, you might think you have free rein to write in omniscient POV.

The Limitations of Omniscience

Omniscient (or third-person omniscient) is the voice in which the narrator sees and knows everything. That really only works for fiction, since none of us knows everything, even about a topic we’ve been studying for decades (we also don’t know what is yet to be discovered), and all of us have biases and filters. Omniscient might have a place in, say, historical biography writing, where the author is completely removed from the subject yet also has access to information his subject didn’t have access to. But that’s a whole other topic.

None of us flesh-and-blood humans is truly omniscient in the way a fiction narrator might be. In fiction, the author creates the entire world and its rules, including who the narrator is and what she knows.

An exceptionally talented author who writes in third-person limited can convince readers his characters are brilliant. My favorite example of this is Sherlock Holmes. Sherlock is considered synonymous with brilliance, but what readers forget is that the author—Sir Arthur Conan Doyle—chose the clues and what they meant (was the frozen fruitcake actually the weapon, or simply an odd choice for dinner?); he chose whether or not Sherlock noticed a particular item (“Watson, look, an egg basket! The widow has chickens!”); he chose every single aspect of every scene in those books. It’s not that Sherlock is brilliant; it’s that Doyle did an exceptional job in mis-directing the reader and choosing the unexpected (an important skill in the mystery genre of fiction).

Historically, journalism has been close to ‘omniscient,’ removing the author (and even first-person pronouns) from writing, techniques that ostensibly convey more authority. However, even journalists pick and choose which facts best illustrate their thesis (aka story). There’s no such thing as truly objective journalism (as we’re seeing more and more).

In nonfiction, you’re writing from your experience about a world that all of us share. Even if you’re writing about data from your research and summarizing what other studies have found, it’s all your perspective. Aka, your interpretation of the facts. You’re creating a story out of the situation.

Most nonfiction is implicit first person. I’m not sure if that’s an official phrase; I’ve never heard it before, but I use “implicit” for a reason.

First person is usually “I, I, I.” But that may not be the case for you, unless you’re writing memoir or philosophy.

That’s where the implicit part comes in: First-person POV means that what you share must be limited to that which you have personally experienced, witnessed or discovered. Any other information can only be disclosed with a stipulation: “A Nobel-winning scientist told me,” “The New York Times had an article in 2009…,” or even the catch-all disclaimer, “It’s widely accepted in unicorn-herding circles that…” You can create scenes and anecdotes and replicate dialogue. You can address the reader directly. But all of what you write grows out of your experience and interpretation of facts. Even when talking about your own experience, it’s advisable to periodically use the qualifier, “In my experience” or “From my perspective.”

Most copy editors will cut those right away, with the admonition that “Of course it’s your experience or your perspective; you’re the one writing this.” And that is true. On the level of traditional nonfiction writing, those clauses are redundant. However, when it comes to transformation and consciousness, asserting interpretations or personal experience as fact can come across as a bit arrogant, in a field that’s ripe for hucksters, narcissists and those who would willfully mislead readers for their own benefit or amusement. Using these clauses shows humility and a willingness to accept that what has been your experience may not be others’.

There’s a paradox here (you’ll see there are many paradoxes in writing), in that we’re often taught (especially in school) that being declarative conveys authority. “I know and you don’t” is the paradigm for most informational books. Isn’t that why people buy books, because they believe the author knows something they don’t? But we’re talking about creating a shared space; this is a new paradigm that uses the language of transformation.

You can say that you sensed or deducted or concluded or picked up some piece of information, but the minute you start speaking for other people, red flags go off in the reader’s mind, consciously or subconsciously. Separate the facts from the interpretations.

Next, we’ll look at alternative narrative techniques, and cautions when using first-person POV.